Description: Comfrey Leaf is an erect perennial growing in most damp areas of the United Kingdom, Europe, western Asia and the U.S.A. It is a vigorous plant with broadly lanceolate leaves up to 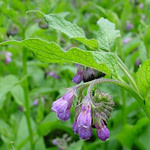 30cm long, which taper into a point. The Comfrey leaf arise as a rosette from the ground, have a rough texture, and are covered with short stiff hairs. The rosette supports a tall, erect flowering stem up to 1.5m tall, covered with sessile opposite leaves and bearing forked stalks which support one-sided racemes of pedicillate bell-shaped mauve or white flowers which curve downwards. The fruits are four greyish-brown nutlets. The rhizome is quite short and thick with black, finger-thick branched roots. The flowering period is from May to July. Russian comfrey (S. peregrinum), widely grown for its horticultural benefits, can also be used medicinally.

Habitat and Cultivation: The roots should be unearthed in the spring or autumn when the allantoin levels are highest, then washed, chopped and dried at a moderate temperature. The leaves are harvested after flowering in early summer.  NB: the young leaves have higher PA levels and should not be harvested.

Root for internal use: Internal consumption of the root should be avoided because of the pyrrolizidine alkaloids, which have been linked by some research to liver cancer in rats (on the other hand, there is data to demonstrate that the whole plant actually has a protective effect against liver poisoning, disease and tumours in experimental animals). Hepatic veno-occlusive disease has been related to Symphytum ingestion at high doses over long periods, and the effects of the alkaloids are cumulative.

Cautions: Care should be taken with very deep wounds as the external application of Symphytum can lead to tissue forming over the wound before it has healed deeper down, leading to the possibility of an abscess.

There are no reviews yet.

Be the first to review “Comfrey Leaf (30gr)” Cancel reply

Please log in again. The login page will open in a new tab. After logging in you can close it and return to this page.